Unbreakable until you broke it 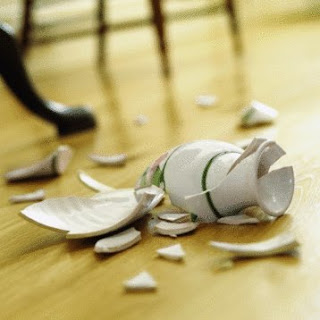 Imagine that someone sold you a vase, he claimed it was perfect and infallible in every way, it could never be broken. It seemed an amazing claim but you trusted the salesman and bought it. You showed if off on your living room and everyone you know admired it. From near and far people came to admire your unbreakable vase.

Then one day you brushed the vase lightly as you walked past, the vase fell and shattered into hundreds of pieces in front of you. You are both shocked and angry, this vase was supposed to be perfect and infallible. You go back to the salesman who turns on you and asks you how you could destroy his perfect vase. It was totally infallible, before you carelessly let it fall and now it is perfect no more. You made the perfect imperfect. Yes, the vase was unbreakable until you broke it.

Reluctantly you admit your mistake, although the salesman's logic still baffles you. You shrug your shoulders and ask him if he could fix the vase and make it "perfect" again. The seller tells you that is totally impossible, by your actions you have changed the nature of the vase forever, it is perfect no more. Ok, you could maybe accept that, but you ask if he could sell you a new perfect vase. Surprisingly, you are told "no". You broke the one perfect vase ever made, the nature of vases are now forever changed and all will be fragile from now on. In fact every time a person breaks a vase for generations to come , it would be a reminder to them of your careless action. Yes, vases were once unbreakable until that fateful day of the "fall."

Well, by now I am sure you can follow the analogy. This is the genesis story. A perfect world that we messed up. Some will argue that the analogy doesn't hold because perfection does not imply infallibility. Something could be perfect today and imperfect tomorrow. Even the most beautiful picture can be destroyed by a three year old's scrawls. Maybe we had a perfect vase in terms of the artwork or design but not in terms of its durabilility. A fair point, but surely when we talk about a perfect world we are not talking merely of aesthetics.It's not just beautiful trees, animals and landscapes. Indeed in terms of raw beauty the world seems no less beautiful than any you will find in a Garden of Eden representation. The critical difference is that in the perfect world there was supposedly no death, suffering or pain, no decay,deterioration or destruction. That sounds like an infallible world, one that could not be broken down, no different from the fictional unbreakable vase.

Yet christian doctrine suggests sin came into the world and things changed. There are millions in the world who accept this idea, yet all would immediately identify the salesman with the super fragile unbreakable vase as a con man. We are often told that man after the fall took on a sinful nature. This talk bothers me. How could any human being change anything of his nature? I can understand how you can change your behaviour, attitudes or responses. But how can you change your nature? That would be like changing the very essence of yourself. You can break the vase but you can't change the way that it was made. A human can no more change his nature than a lion can take on a sheep nature or a butterfly can take on the nature of a boa constrictor.

But, inpite of all these arguments, many will still insist that it is possible for perfection to be transient. Once perfect does not mean always perfect.But, what does that say about God? Can his nature be changed just like his creation? God may have a perfect mind today, but he might get Alzheimer's tomorrow, all because of our sinful actions. Maybe it has happened already, the fall might have affected God too. It affected all of his creation we are told, and that would mean heaven too. How do we know that the imperfections did not reach up to God?

The scary thing is we would never know if God ever becomes less than perfect.For,he is the ultimate self regulator, only he can judge himself.I tell you, there really is no way ever to get your money back after purchasing that vase that was unbreakable until you broke it.
Posted by caribatheist at 12:55 AM