The Barbadian and The Atheist Experience 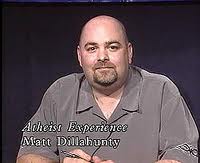 Now that church is no longer my Sunday morning refuge The Atheist Experience has become the show I watch "religiously" on that first day of the week. I love the battle of wits between Matt, Russell, Tracie and company with both theistic and atheistic callers. Last Sunday's show, June 13th was especially unforgettable . As they went to callers I immediately recognised a countryman. Yes, Stefan the first caller was from Barbados, he had an unmistakably Barbadian (Bajan) accent. I perked up immediately. Was this a fellow atheist or a theist that was at least open to the non supernatural?

He was a theist but quickly my anticipation turned to worry as he started to put forward his arguments for God. It was obvious that he was not a regular follower of the show. Had he not ever watched Matt Dillahunty and Jeff Dee, probably the least forgiving of the hosts , go to town on arguments like these before? Honestly, I was preparing myself for a bloodbath. I just prayed that that the hosts would not prey on my Bajan brother. Seems on this one occasion my request was answered, kind of. He was given time to make his points and there was no quick hang up. However, with each passing moment he seemed to sink further in the mire with facepalm after facepalm by the hosts. They was talk of 12 foot tall humans and evidence of Noah's ark, but maybe that the most embarrassing moment came with the " were you there?" objection to the Big Bang argument. I might be a non prophet but I knew that the word "assinine" was soon going to come from the mouth of Matt Dillahunty. It arrived right on cue.

Almost as exciting as watching the show is following the chat room debates simultaneously where on this occasion the word "idiot" was being used liberally. Things got so bad that people started to wonder whether it was a prank caller. Under normal conditions I would have been "cracking up" at the exchanges I was hearing , but not on that day. It was like if I was listening to my past talking with my present. Although I never was as naive as this guy in his beliefs, they were the type of arguments I have had put to me on numerous occasions in Barbados and points that are considered sound arguments by the average Bajan. In days past I had to answer these questions with a gentle response of , " I understand what you are saying but have you considered X." So, let me say now with almost certainty that the call was absolutely genuine. The thing is that the caller was also not a fool by any means. In terms of the way he presented himself I thought he did extremely well. He was not aggressive, ranting or preaching. He put his views forward in a logical manner, he certainly had references and he was quite open to the objections put. I would not be surprised if he honestly had never had a challenge to these ideas before. I believe this was truly his first atheist experience.

I also completely believe that the guy is at college. These ideas are put out as often by PhDs in Barbados as the "living in the blood" evangelist. The most poignant point came when the caller said, " So, a biblical account is just not just good enough?" the hosts said in unison" correct." Then came a few seconds of silence that I found so poignant.For me, that moment epitomised the crux of the matter in Bajan and indeed Caribbean society. As obvious as his comment about the bible seemed to Matt and Jeff I am sure that it hit Stefan l"like a big rock" as we would say in local parlance.

Almost nobody born in our part of the world is able to conceive the bible as " just another book." Indeed in my journey to atheism this was perhaps the most difficult part to get past. Sure, many people have long since rejected the bible as infallible. Perhaps the majority have matured to dismiss Adam , Eve and Jonah as ancient myths. They will even come further forward and reject virgin births and maybe even resurrections. But to almost everybody, the bible still represents some type of truth. And by everybody I am including many persons who are not religious or as we would say have not " darkened a church door" in years. Society still claims that the bible is a holy book. It may not be free of error but its certainly not equatable with Moby Dick, Harry Potter or Grimm's Fairy tales.

Indeed there are many people in Barbados who will say " I am not a Christian." This is a curious statement, yet one that is virtually never challenged. But what do they mean? They never offer up or give the impression that they are now followers of an alternative religion. However, by the same token they would certainly not call themselves atheist or agnostic. They would not even describe themselves with the generic term "spiritual". It's just " I am not a Christian."

I think that it really means, "I am not a fundamentalist and I don't want to follow those crazy faith heads who put limits on sexual behaviour, the types of parties I can attend, the movies I can watch, the music I can listen to or the number of beers I can drink. I enjoy my life and I just don't want it being interfered with. I just want to keep doing what I am doing because I enjoy it and I don't think I am harming anybody." The response of these people to the religious zealots is "I'll think about that later," and so we get the mass flow to church of these people at 70 plus when they think they might be "called home soon." Indeed as youths, I heard many of these non christians admit to the fundamentalists that they do have moments of "doubt." Times when they have thoughts about the threat of hell and judgement day but they just try to push them aside. .It is these people who are in line with the christian strawman atheist who only denies Jesus because he wants to keep on sinning.

What seems clear to me now is that these non Christians are really just latent believers. They may not practice faith and may even be vehemently anti church, but they still believe the bible is a special book. They don't practice because they want to continue secular lifestyles and don't want to be labelled hypocrites. It's always interesting to hear some of these non Christians lambaste the flock. " You is a Christian, what you doing in this party getting on like that?" they say. These types of statements say a lot. It shows they accept the basic doctrine fundamentalist preach. It is funny, but even moderate Christians identify as non Christians sometimes. I remember many anglicans telling me they don't understand why Christians want to have their own exclusive crop over (carnival) band. " Why can't they just jump with the rest of us?" they remarked.

I often tell people that in Barbados there is no such thing as atheism. I believe when that Barbadian caller heard the word atheist he thought it meant non Christian.The local non believer that can easily be converted by the "Heaven's Gate Hell Flames" approach. The "skeptic" who can be stopped in his tracks when you point out what the bible says about his behaviour. In Barbados, what the bible says can never be completely ignored. In fact many national debates will include somebody who will bring to the table what we commonly call "the biblical perspective." And, believe you me, this position must be given at least equal weight. Even a Muslim, Hindu, Baha'i or Rastafarian in the country will never claim that the bible is not God's word. They only claim that their sacred writings are holy too.

So, the bible is still the book that is "up there" to virtually all Caribbean people. So to hear two hosts say that what the bible says is irrelevant would be just mind boggling to put it mildly. This respect for the bible is really entrenched and almost impossible to break. I mean, even today inspite of all my non belief I would feel extremely uncomfortable using a bible to prop up my window or make my rocky bed level, even if not one single soul was watching and that's the gospel truth.
Posted by caribatheist at 1:48 PM