Interview with Hitchens: The questions give you all the answers 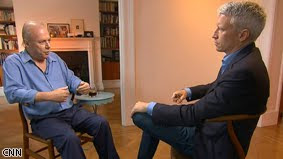 It was a sad sight to see Christopher Hitchens a shadow of his former self on CNN a few nights ago. Yet, it was an inspiration to see a man leaning on reason rather than prayer to get him through his cancer. Ironically he seemed to be dealing with the issue of his mortality and possible death in the near future with indeed much grace and perhaps more peace than many who claim to be convinced that a world of eternal bliss lies before them. Maybe this is the advantage of living a life in reality, you can spend your life preparing for the moment that you will be no more. When your moment comes you have played the scenario in your mind many times and is not a time to paralyse you with fear. There is no feeling of, "Why me?" or "How does this fit into God's plan?" There is no deity to be angry at or disappointed in. You come to the conclusion that I am a part of nature and things in nature die, simple. I always find interviews like the one on AC 360 as fascinating for the questions asked as by the answers given. Many of the questions posed by Anderson Cooper spoke volumes. One or two really resonated with me.

"So you don't pray at all?" Anderson asked. I thought this was a truly remarkable question to ask a man that had dedicated his entire life to fiercely promoting reason and the elimination of the supernatural ideas. The author of " God is not Great." Did Cooper think that this was all a facade? It was as if he thought this was his great moment of investigative journalism. He could get Christopher to admit something at his darkest hour. Maybe an " Ok, ok you got me I do say an itsy bitsy prayer but only once or twice a month." I have played this question over and over in my head and the only conclusion I can come to is that Cooper thinks that Hitchens might be a closet theist. Well, if Hitchens is a theist, who among us can be atheist? There is of course the cliche that there are no atheists in foxholes. But Cooper's question suggests that he thinks there are no atheists. No atheists full-stop.

Yes, it must mean that he thinks everybody deep down knows there is a God there, it's just an attempt to deny. The books, the speeches, the debates, the blogs, all a cover, an atheist's attempt to convince himself by repetition. If you say "God is not Great" enough times maybe you'll start to believe it. This is all in spite of the fact that not only Hitchens, but several writers, bloggers and speakers are at pains in everything they say or publish to show step by step how they have reached their position by a rigorous process of logic. They don't just say we used reason and that's it. They always show the process, sometimes making it painstakingly simple. Even after that , the theist is inevitably invited to criticise the logic and point out any flaws that might have been overlooked. Invariably no logical objections are forthcoming. Yet, the theist continues to ask questions which clearly show that they don't think that the conclusion that the atheist says he came to is what his conclusion really was. But why would you go through the hard logic and reasoning process and then toss out the conclusion you come to? Unless of course, you really weren't interested in logic in the first place. That is the key, many persons of faith don't believe in using logic to reach such conclusions. They reason that if they don't atheists don't either. They think that atheists are just using logic to appear to bolster their preconceived beliefs, so they never bother to explore the atheists' arguments seriously. Talk about the man in the mirror.

This idea of emotional appeal came up also in the interview opening, when Cooper said. " Many are wondering if Hitchens' diagnosis would have changed his belief in God." Again a curious question, at least from an atheist's perspective. Why would an ailment that you are suffering from affect things you have discovered in the world through  reasoning ? It would be like someone asking you what was 2+2 when you were robust and healthy and getting the answer '4'. Then as you are on your death bed the same person comes up to you taunting you by saying , " So do you still think 2+2 = 4 now?"
Many theists really don't get the fact that for an atheist, you arrive at the conclusion 'there is no God' by the same process that you arrive at the conclusion that 2+2 =4. Emotion in no way factors into the decision. The only way you can expect illness to effect a person's belief in god is if you considered that emotion does or should play a part in making a judgement on reality. More and more the questions show that the general theist perspective is that questions about the reality of the universe cannot be studied without regard to emotional implications. That's the only conclusion I can come to. Of course in most debates believers never state that their beliefs are based on emotion even if they admit faith makes them happy. They always start out with the assertion that the belief is real. The other benefits come later and are a consequence of having faith, not the cause. When you analyse the questions Christian's ask and how they phrase them it's clear that they believe the opposite. I am now learning that the answers or the truth of what people think is really contained in the questions they ask. If you assess them you can really learn everything about what they think. You never actually need to ask them any questions. You just need to listen to how they question you.

Oh yes, believers, as amazing as it may seem atheists actually do sincerely believe what they profess. When I think about it that's a strange concept to grasp in a world where what you think and what you say rarely seem to coincide. One last comment on the interview.  The idea was presented  that surely at a time like this Hitch should be hedging his bet on whether there is a God or not. Yes, as much as I have heard all the many objections by atheists, Pascal's Wager does remain the apologetic of choice for many Christians. It is a weird thing that so many Christians say they would rather believe in a God and be wrong than not believe and be wrong. Surely that statement suggests they have some doubts. Are they saying they really don't KNOW that they redeemer liveth? Why would you have to bet on a horse that everybody already knows won the race? They really put themselves in Catch 22 situation with this type of reasoning or should I say Hitch 22.
Posted by caribatheist at 12:03 AM