Nothing to write about 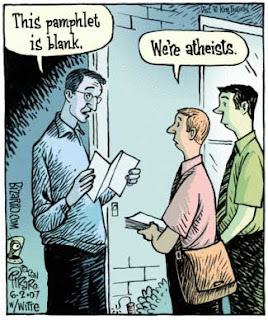 Well, things have settled down a little in the Caribbean. There has been thankfully no need for mass appeals to the gods for mercy since the ravaging storm Tomas and the illness and subsequent death of the Barbados prime minister. Things have also been relatively quiet on the international faith scene and there are no recent crazy believer statements on my facebook page. In short, there is nothing to write about. So, that's exactly what I thought I would do this week, write about nothing. It's fitting I think, because there is nothing that the faithful like more than telling us atheists that we are right about nothing. Moreover, I have found that religious people when debating with atheists tend to engage a lot in "nothingness" talk.

"How can you get something from nothing?" is eternally the theistic cry. You can bring your arsenal of arguments from physics, chemistry, paleontology, biology,cosmology, archaeology, geology or psychology to justify your position that God does not exist. It matters not to them, because they tell you that you simply can't get something from nothing. They go on to say we atheists believe in nothing and nothing could change our minds. I suppose given all of this it is no surprise that they should think we have nothing of substance to say.

It amazes me that religious people don't see that there is nothing in their argument. Firstly, I am not sure why they are so sure that there had to have been nothing to begin with. Lawrence Krause, a leading physicist, gave a fascinating lecture where he explains that what we consider "nothing" actually has more mass than all the stars, planets and other "somethings" put together. But I don't think we even need to go to a level as sophisticated as that to see the problems with the concept of "nothing." What is a "nothing"? I have certainly never seen one. In my experience "nothing" is used as a relative rather than an absolute term.

Whenever we say the words, " there is nothing" we mean that there is none of the thing or category of things which we are looking for. If we go into a room and state that we see nothing, it doesn't mean absolutely nothing. It may mean there is no furniture. However, the room might have a carpet on the floor or pictures hanging on the wall but it would still be defined as "empty". Of course at the molecular level the room is filled with gases and microbes. Going further down there are atoms with electrons, protons , quarks etc. If you are worried about having a cancer and go to a doctor who looks at an x ray and tells you he sees nothing; he is not telling you have no bones, tissue or muscle fibres.

We can apply this model conceptually to anything that we define as "nothing". Even if we speak of a vacuum, that is not a "nothing" because it still has particular properties and that makes it a "something." Indeed, once we can define a thing it is not a "nothing." In my mind a "nothing" would have to be something devoid of any properties or characteristics. Once we can define it, we have a "something." If we accept that the universe had a beginning, it would have to have existed at that point in some state "X." Even if it was a void that would still have to have some properties, some defining qualities that differentiate it from every other state. The more I think about it, I really don't think there is any such thing as "nothing." I don't believe in "nothing." So, there is one atheist myth debunked. In that respect God and "nothing" have a lot in common, both vacuous concepts. God is undefined because it can include everything while "nothing" is the obvious antithesis.

Once we recognise that the universe was in some state at the beginning, our "nothing" problem goes away. For we have any number of examples in nature where we see one state change in to another. In most of these cases we do not assert that an intelligent supernatural agent is needed in the explanation. At school I did countless chemistry experiments where changes of states occurred. You could get a precipitate salt forming from the mixing of an acid and alkaline solution, but these were never regarded as metaphysical mysteries. It was all natural, a consequence of the interaction between the chemicals which gave rise to something completely different. Indeed, what would be surprising in these experiments would be if you didn't get the product that you expected to get. That would be the mystery and in almost every case it was because you, the experimenter, made an error. Ironically, in such circumstances, it was you, the supposedly intelligent agent, that was getting in the way of nature. I think this analogy is interesting, perhaps the intervention of a God would have impeded nature and prevented the formation of a universe rather than the other way around . In any case, if no divine hand is needed to explain the appearance of colourful solutions or gelatinous precipitates in lab experiments why is a god needed to explain that "big bang reaction" at the beginning of time?

When we look through the universe we see changes that occur all the time; tectonic plates shifting, volcanoes erupting, stars exploding, black holes and dark matter affecting space and time. This is all part of this wondrous thing we call nature. Even though some people think it's all part of God's grand design, I have never heard anyone argue that God is needed to explode a star any more than he is needed to give a "push" at the top of a cliff to ensure a dropped stone reaches the earth below. But then comes the argument which is closely related to the "something from nothing" question. How can we get life from non life? This is a very strange question in light of what we have already said. We know that "life" and "non-life" are made up of all the same elements. We know that elements when they rearrange themselves can form things with different properties. Why are some people so adamant therefore that we can't get life from non life? Why don't they say it is impossible to get stars from non stars, precipitates from non precipitates, colour from non colour or a tsunami from a non tsunami? Why do we consider this thing called "life" so different that we regard it as outside of nature's capabilities?

That's the thing about religion, it makes us the most important thing in the world, rather than just one minuscule part of the many things nature does . We are the great "something" that could not be here unless nature had some help from the outside. We need to have been specially created by a God without whom we would of course be nothing.

But wait, I just remembered I had nothing to write today. Yet I am seeing eight paragraphs above this one. That's amazing ! Well theists, the existence of this blog post seems to suggest that something can come out of nothing after all.
Posted by caribatheist at 8:18 AM