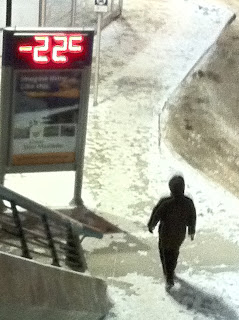 We've had a rough time in terms of weather conditions here in Calgary in the last few weeks. Many days have been like the one in the picture on the right. I took this photo at a nearby bus station, an evening when I could barely feel the camera in my hands. That day was bitterly cold. One of those days where no amount of protective clothing seems to be enough. For my Caribbean friends, YES, that is a MINUS sign in front of that number 22. In recent days it has been the continuous snowfall that has created the challenge to pedestrians and drivers alike.

Some may be surprised to learn that, in between it all there have been moments of warmer weather that feel more like spring or early fall. The reason for these radical change in temperature? It's the Chinook winds. These winds that come into this area from the west are formed as cool air rises over the Rocky Mountains. When they descend on our side they become warmer, creating dramatic temperature increases during the course of a day. This can sometimes melt as much as one foot of snow in just a few hours.

Apart from the warming the Chinook brings there is also a spectacular visual effect in the sky known as the "Chinook Arch." The clouds form an arc with the pale blue sky underneath and a hint of yellow sunlight refracting from the edges. I know many atheists will cringe to hear this, but when I walked outside my house in the depth of winter and experienced the full effect of a Chinook for the first time it was almost a spiritual experience.The view was something like the photo below.

We human beings have something of a fetish over arcs. Perhaps it's the upbringing so many of us have had in Christianity. Arches, arcs and arks are so popular in the bible. Whether its the one that carried two of every animal or the one that was being carried when it slipped and caused a rather unfortunate death. Then there is the rainbow that everyone loves, the promise of God. In contemporary times rainbows continue to fascinate us. Who can forget that viral youtube video from last year where a guy almost had an orgasm when he saw " a double rainbow all the way round." But that day of the Chinook, when I looked up in the sky it was church that came into my mind. I remembered a visit I made to St.Paul's Cathedral in London where the arches are such a beautiful part of the architecture. It was then I started to realise that when it comes to churches and the Chinooks there are so many similarities.

Perhaps the reason I was so excited to experience the Chinook was that I had heard so much about it from the time I landed here. "Don't worry about the cold winters." people would tell me.
"We have this thing called the Chinook that will come and warm you when you least expect it." In Calgary everybody talks about the Chinook, it is an integral part of the culture. There is even a popular mall here carrying the name. In spite of all the talk, during the first year I was here we had no Chinooks and I started to wonder if the whole thing was just a myth, a figment of the Calgarian imagination. Alas, in my second winter the promised salvation came. It came in all its glory right after the depth of a - 35 day. I felt like screaming out to the heavens,
"Praise the Lord!" It wouldn't have taken much more for me to fall on my knees in "Road to Damascus" style and pay the Chinook homage.

Later that year I returned to Barbados and told my friends there of my experiences in Canada. Naturally, I told them about the Chinook. I told them that the winters were cold but this Chinook was a life saver and there were few things in life I had experienced that were more amazing. My friends were intrigued. " Tell us more about this Chinook!" they implored. I gladly went on. "Well it's like this, it's the middle of winter, it's -30 and then magically this wind blows in and we get up to ten degrees Celsius in about half an hour!"

I waited for my friends' response. An exclamation of "Wow!" or " Fantastic" or "That's incredible!" Shockingly, there was nothing. I just got blank faces staring back at me. It's like they were still waiting for me to deliver the punchline. Then suddenly someone burst out laughing " Ten degrees, you think ten degrees is warm? HAHA!" So I continued, "Well there are times when it can even get up to 20 degrees Celsius in the middle of January." Surely that would now impress them. But no, even more laughter ensued. "Oooh, 20 degrees that's so so hot." one of them said sarcastically. I felt a bit embarrassed and slightly upset. How dare they make fun of my experience. They had no right to mock me. If only they went to Calgary with me then they would understand.

I thought for a few minutes and then I started to laugh at myself. Of course the Chinook would be unimpressive to a West Indian. Hey, 24 degrees Celsius counts as a cold day down in the islands. A few years ago I would probably have been the one leading the mockery. It is exactly the same thing when a christian tries to convert a lifelong atheist. When he tells the atheist he should become christian and go to church to experience the love of Christ he is like the new Canadian telling someone from the Caribbean they should go and live in Calgary to experience the salvation of the Chinook.

The Christian just like the new Canadian does not realise that the emigration has changed his reference point. He forgets that when he entered the church his self esteem was reduced to a depth just as low as the temperatures in an Alberta winter. He is taught that he is nothing, worthless, not deserving of anything the world has to offer, he is a hopeless sinner, a wretch in need of saving. As painful as this new reality in Christianity seems at first, the new convert is taught that all is not lost. If he holds on in faith and waits on Jesus Christ, deliverance will come. Then one day with the help of friends and family that great awakening arrives. He feels his confidence rising and a thrill that comes with the recognition that "Yes, I am something after all!" Something, only because of the love, mercy and power of Jesus. With that thrilling moment of faith there is a feeling of empowerment that drives evangelism, because the new Christian can stand up and proclaim, " I have had a personal experience of the saving power of my Lord Jesus Christ."

That's the thing about it. Humans are very emotionally responsive to sudden upward movements. It is the change in state, the "delta T" rather than the absolute value "T" that really matters.We feel great when we think we have a last minute escape from a disaster even if we end up worse off than where we started. It is why God is praised for saving one foot of a surviving passenger in a car accident when the life of the driver has been lost. It is also why we thank God when we were told we were going to be fired but the next day the boss has a change of heart and let's up keep or job with half the pay.

I have to accept that no matter how many pictures I send with Calgarians dancing in shorts during a Chinook; how many testimonies I have from those visiting Calgary from Edmonton or Siberia, my Caribbean friends are not going to be convinced to come here to experience this phenomenon. Ten degrees is still ten degrees no matter how you try to spin it. Caribbean people are not close minded or dogmatic for saying "no thanks" and remaining firmly at home. If there is no point in going to live in cold Calgary just to feel the Chinook, there is no point subjecting yourself to the cross just to get a crown less valuable than the hat you wear now. Neither the experience of Calvary nor Calgary is required to lead a fulfilling life.

So, the obvious next question is," Why have I left my Caribbean paradise to subject myself to this bitterly cold land?" That my friends is truly a mystery, one every bit as unsolvable as those that God throws out at us everyday.
Posted by caribatheist at 6:59 PM