How can they know it's NOT May 21st?: The Irrational Amayists 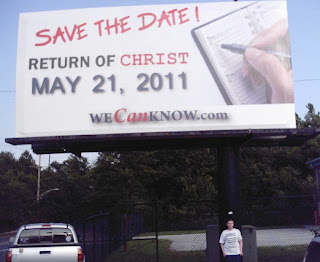 The atheists are having a field day. What started as a simple shake of the head and groan of "not again" has mushroomed into something massive. The request for the possessions of those departing have been made,  the drinks for the rapture parties are on ice and everyone is ready for the big LOL come May 22nd. Perhaps it's not unsurprising that the atheists have taken this opportunity to turn up the volume of this May mockery. What has been a little unexpected is how so many evangelical christians have been equally dismissive of the statement of " We can know" by the now famous Harold Camping, the man behind all the bruhaha.

For the majority of the fundamentalists, Harold Camping is seen as much of a maniac as he is by atheists but for entirely different reasons. Not because the idea of rapture is just downright ridiculous and there is nothing to suggest that there is any such thing as selective gravity even for 'glorifed' bodies.  Not because  many of the bodies that would be rapture candidates have been decomposed centuries ago and that the material that they were composed of are as likely to be found in a urinary tract as in any soil sample in a cemetery. No, none of that poses any problem at all. The issue that makes Camping crazy is that he clams to know the exact date these things will happen. He just can't be right because the bible says, " No one knows the day or the hour."

But why are some Christians so quick to dismiss Camping? If no one knows it not only means Camping doesn't know, it means no other Christian knows either. Camping cannot know for certain that the rapture will happen May 21st, but that does not mean he cannot be right. A rapture date of May 21st in no way contradicts the statement " No one knows the day or the hour." I recognise and respect Camping's deep faith in his rapture day that falls in May 2011.  He is a committed Mayist. There are fundamentalists on the other side who believe in the rapture too but they reject that it will happen this May. These skeptics are the Amayists, who reject the Mayist claims. Even though they admit that they have no idea when the 'son of man cometh', they dogmatically want to make the claim that May 21st is NOT judgement day.

Amayism is simply irrational. How can these Amayists possibly know that May 21st is incorrect? The only way to know for sure that the rapture won't happen then is to have been there on May 21st , 2011. And nobody, at least at the time I am writing this, has ever seen May 21st, 2011. But that's typical of Amayists,they are so arrogant they just think they know everything.  To know what's going to happen on May 21st they would have to be God himself. Ask these Amayists  what is their evidence that Amayism is true and correct, I guarantee they'll trip up every time. I know they don't like to hear it but it is the truth. It takes more faith to be an Amayist.

Some Amayists try to argue that the criticisms they face are unfair. They keep saying that Amayism is not a dogmatic position at all. They claim that they are agnostic Amayists. They are not claiming that they know for sure that May 21st is not the date, they just haven't found any evidence to suggest that it is, so they prefer to withhold belief in Mayism for the time being. But who are they kidding these people are just playing a semantic word game. We know full well that they reject Mayism outright. What evidence are these Amayists looking for? Don't fool yourself, there is no evidence that would ever convince the Amayists. They start with an Amayist worldview that cannot be altered. They wouldn't believe even if  'May 21st'  came down from heaven himself and said, "I am the day!"

Why the Mayists have to endure such daily persecution? I don't know. If they don't believe May 21st is the day of the rapture why don't they just keep quiet about it and let the Mayists go about their mission in peace? Why do Amayists feel the need to tear down the poor Mayists, writing articles in the newspaper or blogs  saying that the Mayist have the day wrong and have misinterpreted scripture? One writer in a paper today was even so militant he called the idea of the May 21st  judgement " rubbish." I hope that the newspaper takes action against him. If it was me I would let him go immediately. No apology would be sufficient for using such filthy Anti Mayist language. The thing is, that writer is not alone. When you read the tone of  many of the things that Amayists publish you can see they are angry. I don't understand why they are so angry. If you ask me they are just scared, they know very well that May 21st is judgement Day.They just know they are not rapture ready and  they don't want to face it .  They choose to deny May 21st  in order to extend their sinning a little while longer. It is so easy to see through them.

Some of the Amayists point to other wrong date predictions by Decemberists, Marchists and many other datists throughout history. They reason that if all the other datists are false prophets, Mayists must be false prophets as well. Now that is simply ridiculous. Just because they are some fake predictions doesn't mean that all predictions are fake. That's like saying that just because they are many copies of the 'Mona Lisa' there is no real 'Mona Lisa.' The other forms of datism were obviously man made. The ancient datists either made up their dates to make themselves feel good or were honestly mistaken. Mayism is different because it predicts a rapture date of May 21st. No other datist predicted that date.Think about it,  the chance that May 21st would be chosen as THE date is 1/ 366, far too unlikely to be picked purely by chance.

Amayism is a silly choice anyway. If you prepare for the rapture on May 21st and nothing happens, you have lost nothing. However, if you choose Amayism, judgement comes on that day and you are not ready you face the torment of the great tribulation. How can it make sense to take that chance?

Believe it or not, many Amayists still scoff at these strong arguments. I ask them if Mayism is so ridiculous why is it that so many people out there believe it and why  it is such a popular billboard? How could Mayism have spread so fast to so many parts of the world if it isn't true. There has been more May 21st merchandise made than there has been for any other previous end of the word prediction. CNN, BBC, NBC have all covered it. Google shows hundreds of new articles on the internet everyday. No other date prophecy has gotten this coverage. How do you explain that?  Well, predictably Amayists have pointed to the funds spent in advertising the Camping campaign, the influence the Camping group has in the media, the impact of technology in the 21st century. Here we see once again the naturalistic bias of the  Amayist. Quite clearly it's the hand of God that made the word of May 21st spread across the globe. It' a miracle. No way a human being could have set things up  like this and it certainly couldn't have happened by chance.

In spite of all this compelling evidence that the world will end on May 21st, I realise that it is possible that someone will read this blog post on or after May 22nd, 2011 and no rapture or judgement will have occurred. On the face of it an Amayist may consider that no rapture occurring is a direct refutation to Mayism. However, to believe that would just be naive.  You have to look at the writings of the followers of Mayism in context. You see,  Amayists always look for the easy targets, they attack Mayist literalists.  The more scholarly Mayists never claimed that the rapture was necessarily bodies flying up to heaven on May 21st. They emphasised that the rapture must be interpreted in a spiritual context. What matters is not whether you are raptured in body but whether you are raptured in your heart.

Ah, I can see you Amayists there scratching your heads. You will never understand the beauty, symbolism and artistry of sophisticated Mayism. It's no wonder you guys are always left behind.
Posted by caribatheist at 12:12 AM