Saying Goodbye to Christopher Hitchens: Unity in the Midst of Grief 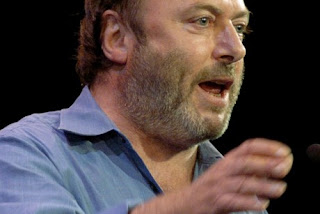 Last Thursday night the non-believing world let out a collective groan. It was the news everyone knew was coming but no one wanted to hear. Christopher Hitchens was dead. Immediately, the tributes started to flow in from every corner of the 'atheosphere'  and indeed from many in the religious world who stood on the opposite side, but could appreciate a champion when they saw one.

It was a strange feeling for me during that night. I  experienced at that moment something I had never felt before in the three years that I have identified myself as an atheist. I suddenly realised that I was part of something truly global and it felt great to be part of it even as we all grieved. It has so often been said that bringing atheists together is like 'herding cats' but that night and the days following, every one in the herd was raising a toast to the fallen 'horseman' popularly known as Hitch. It didn't seem to matter what side of the secular spectrum you fell on. Those who favoured more measured methods of promoting secularism through humanism or explicitly working with the churches, seemed as touched as those that modelled themselves on the more hostile approach of Hitch himself. Many atheist bloggers and you tubers that are usually  not short of an opinion, seemed genuinely too shocked to talk or make a key stroke on their computers.Thursday was a night when you saw en masse the humanity of atheism and the grieving from the heart of a community that is often accused of not having one. Yet, it was so different from the kind of tributes I had experienced in religious life, it was huge but it was not worship. Even in  grief, atheists were  talking about things they thought Hitch was flat out wrong about, like his support of the Iraq war. I was told growing up that one should never speak ill of the dead. That didn't seem to be the modus operandi applied Thursday night,  yet the support for the man and what he represented was overwhelming. I think that says a lot for the value of the secular over the sacred.

It is common when a prominent person in any field dies to say, " There will never be another X." It is almost a cliche. Well, it seems on this occasion it may not be an exaggeration. The way Hitch delivered  his points during a debate, showed absolute brilliance. He could easily have made it as a stand up comic, his timing and turns of phrase so impeccable. It was an honour to join with members of the secular community here in Calgary and give a toast to 'the Hitch' on Saturday. None of us there had ever met him, yet he had clearly touched all our lives. It was years since I had got together with other people to sip wine for someone none of us had ever met in person. In the days of old in Barbados it was a weekly gathering to pay homage to a Jew that  lived 2000 years ago. Somehow the Christopher I was thinking about on Saturday meant so much more than the Christ offer I used to make in those bygone days.

I have been paying my own tribute to Hitch by listening to some of his famous debates. Some classic moments like these:

On the Catholic church: " They seem to have altered the popular ' no child left behind' to ' no child's behind left.' "

After a less than complimentary introduction of him from an MC at a debate: " Thanks for that introduction, which of all the introductions I have had in my life, is certainly the most.................(pause for dramatic effect) recent."

There was just nothing you could do with Hitch, not a moment that he ever appeared the slightest bit fazed in a debate.Yet, he could evoke an enormous degree of passion at any moment. Who could ever forget his many references to heaven as a 'Celestial North Korea'? There is a tinge of irony that Kim Jong Il, a man referenced so often by Hitch, died so soon after him. It would certainly have made for an interesting discussion between those two in the line up going to the 'Pearly Gates.'

Aside from all Hitch's brilliance though, I think it is something much more that is causing people to respond to him so emphatically after his death. It is the way he played out the last year of his life, the way he looked death in the face squarely and dealt with it. People of faith tend to face the threat of death by immediately seeking to get around it. They are like the student that begs the professor to grant an extension once he realises the assignment deadline is a tight one. Maybe, there are times such pleas are heard and leniency is granted but often valuable time is lost while going through the process of the appeal. Also, quite often even after the extra time, not much more work is produced. Scholars like Hitchens, don't spend time debating and  negotiating with the time the professor has set, they just put their heads down and get going, using the deadline as a spur to get the brain in gear and motor down the track. By the time others get their extension granted, Hitch has already finished two or three assignments. That's just his way and I think that's the way we all should roll. 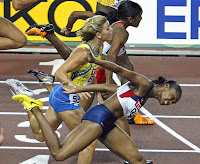 Indeed, the way Hitch finished his life reminds me a lot of the way that we were told to finish races on the track at school. We were always told to run through the tape, make that lunge to the line with the torso, regardless of the effort we had expended before. It was not something that came automatically, it was tempting to cruise through the finish after a gruelling run, especially if you  thought you were well ahead or were on your way to capturing some kind of medal. Well, Hitch may have been a winner but he ran through the tape and threw everything he had as the finish line got closer. From the time he heard the bell he was off and away. The race is over for him now and he has plenty of time to rest. Sadly, he can't hear the applause now ringing for him around the stadium. At least we in the crowd can take heart, knowing that if we all take his example and run with it, reason will win out one day.


Posted by caribatheist at 4:08 PM