No Religion Know Jesus?: You can't get to heaven without a ladder

Last week I got involved in one of those facebook debates. It started with a comment I got from one of  my Christian friends, who remarked that that my promotion of  'No Religion' in my blog's title was a good one. She told me that she doesn't believe in religion either, that religion is something that separates us from God and the emphasis that churches put on ceremony and doctrine distracts people from what really matters which is knowing and accepting Jesus as their saviour. So, her clever retort to me was,"No Religion, Know Jesus!"

This type of thinking is one that I have heard often from Christians, especially those with an evangelical bent. It is most frequently framed as ' Christianity is not about a religion it is about a relationship.' I just can't believe that the persons who utter these statements think about what they are saying. Religion is defined in the Oxford dictionary as


' the belief in and worship of a superhuman controlling power, especially a personal God or gods.'

So, the belief that you have a  personal relationship with an invisible supernatural being is exactly what religion is!  Every religion I know of, encompasses some relationship between human beings and someone or something in the supernatural.  In the past I have viewed 'I don't believe in religion' as a tactic, it makes it easy for believers to separate themselves from aspects of their faith that they find repulsive, absurd or simply meaningless. They could take the good things  and call them ' things that God REALLY wants' and not be called to account for leaving out the 'religious' things they don't like.

Really! How can we come to know Jesus without religion? The story that we hear about Jesus comes from our bible, the central text of Christianity. If there was no Christianity how would anybody  know Jesus? That would be like expecting someone to come to know Luke Skywalker without ever watching anything about  'Star Wars'.

For a long time I did think that this argument that people of faith bring was not worth responding to.  It seemed that there was no way that you could realistically separate your God from the mythical story that brought him forth. However, these days I am realising just how widespread this view of religion without religion is. So, I thought I needed to address it. Having  looked closely at the arguments that I have heard from many regarding this 'not about religion' argument, this is how I  see it.

The Ladder of  Religion 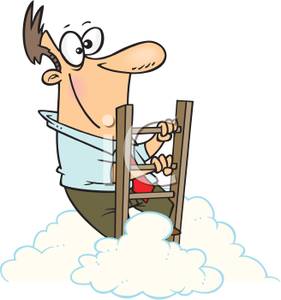 Religion is like a ladder. A ladder perhaps not dissimilar to the one Jacob dreamt about. Impactful on the mind, stirring to the emotions but just as close to reality as the images that fill your brain when you nod off at night. We who grow up in religious cultures, get taught how to climb this ladder from the time we are in kindergarten.. Once we are old enough to walk, we are mature enough to start having climbing lessons. Each rung we reach out to teaches us a little bit more about the God of our culture. First it is how he created everything in the world including us. The next step is how he rewards and punishes us. Then we reach up to learn the stories that surround great men and women who have shown us what God is like. It is a lovely ascent for many people. We learn his songs along the way, then come to understand complicated rituals that pay homage to him, we learn how to worship him, we read the books he wrote and act out some of the things he experienced. All the while, we literally feel we are reaching up to God, getting ever closer to the prize in heaven. Then, along the way, something happens. Something that you just can't explain or put into words. It happens differently for every individual and it is commonly referred to as an 'experience.'

I have heard of many different 'experiences', and even had some of my own. An 'experience' is  something that you think cannot be explained in terms of  what you understand from physical and material reality. Something that resonates with the non natural world you have been discovering on your religious climb.At that moment it feels like God himself has reached down to you from heaven and raised you up off the ladder, pulling you to himself. That 'experience' tells you that you have found God and that is the point in the process where the ladder of religion becomes irrelevant. No need for ladders anymore when God is giving you the elevation. Or as one of my friends put it, 'no need to keep the scaffolding once the house is complete.' I think this is exactly what Christians mean when they say that 'Religion is man reaching out to God while Christianity is God reaching out to man.

Yes, 'experiences' of God reaching out can be very emotionally powerful. The sort of thing you never forget for the rest of your life. It could be a feeling of peace in the middle of a stressful situation. The relief of a long lost  friend coming through to help you with finances when you thought all hope was lost. The diagnosis of an 'all is normal' when the doctor told you a week earlier that your child was going to be born with a deformity. A voice that seems to come from inside you telling you to 'give it up' when you find yourself in the midst of gang life dealing with drugs, alcohol and prostitution.

These are just a few examples of 'experiences' I have heard about. There are millions more of these ranging from the trivial to the life transforming. As varied as they are, they all have one thing in common. When they come along they render the religious ladder redundant. In these moments we come to 'know' God, the God that confirms all we were learning about as we were climbing the ladder.  We believe at these points that God has taken us into his hands, he can take care of the heavy lifting now and there is no need to rely on our puny footsteps on a wobbly  little ladder to get us to the top. When God takes us in his arm he pushes the ladder away, just like how Benny Hinn pushes away the crutches of the 'healed' crippled people in those revival services.

So, as God pushes away the ladder,  he pushes away  religion. Now, the doctrines, the hymns, the recited passages, the creeds, the communion, the sacraments,  even the bible don't really matter in the overall scheme of things. You have now got a taste of the 'true' God. Understanding this process, is something that I think is vital for atheists, for me it explains a lot of the mystery. You see, in trying to convince believers in all faiths that their belief in their scriptures is misplaced, we point to things like absurdities in bible passages, contradictions within the texts, religious explanations about the world that flatly fly in the face of what the natural sciences teach us. We write blogs, produce you tube videos and  recommend books that speak to these things, but none of this makes a difference to the believer that has had an 'experience.' Pointing out the rotting wood or showing them all the loose rungs that are about to fall to the ground mean nothing  after they have left the ladder behind.

They will humour us by indulging in debates and discussions on aspects of philosophy, logical fallacies, hermeneutics and the scientific method but it's just a 'what if' game for them. They 'know' God already, so what if you can use logic to prove he isn't there? It's all a bit of a joke. It's like someone bringing a watertight argument to me, that proves that I don't exist. That's what I think they mean when they say it's not about religion, they mean it's not about that ladder, those initial steps they took to try to find God, it is about the God that found  them, the one they have experienced first hand. The one they truly have a relationship with.

The interesting thing is that even though the religion ladder is pushed aside, it's not as if it's thrown away.  It is maintained as a relic, a heirloom that represents that relationship they now have. The ladder becomes sacred more for what it stood for than for the level of support it gave.  That is why so many Christians display their bibles proudly on book cases without ever cracking them open to read a verse. It's the book that's holy, not necessarily the stuff inside it. It's no longer a simple story collection with talking animals, global floods and ritual killings. With your revealed saviour, you can leave the old stories in the Garden of Eden and start out on  your 'cherry picking' walk with Jesus. You have met a God that's loving so you can discard anything people tell you about a vengeful, wrathful tyrant described in the bible. Direct experience must always win over second hand  accounts. You are left in a bit of a conundrum because you still think what that book says is true and was written by God, because the God you ultimately found was recognisable because his characteristics squared with the descriptions you found within the book he wrote. But, the thing to remember is that you have a direct relationship with the one who understands all. Surely he can explain it and  will one day if he feels its necessary. If he never does, it's not a big problem, these little annoying things that detractors bring up are mere religious quibbles, like workmen arguing over who has the strongest ladder.

Still, I would advise my christian friends that try to down play the importance of the religious ladder to think again. They would never have been able to identify their saviour unless their religion had told them who to look for,  the ladder had to be there, leaning them in the right direction. There is just no way to know Jesus unless you know about his religion first. Strangely enough, nobody finds Jesus who has never heard of him. It's true, no God can find you unless you are some point on the ladder that reaches up to him.  While climbing, you may have stopped due to fatigue or even  have turned to scurry  back down thinking its not worth it, but once you have stepped out on to a  rung of a religion, its God is liable to swoop down at some point and pick you up. Of course, for every God in history, there is a ladder made by humans to reach him. It appears most of these man made ladders lead to man made Gods. Some say, all except one. I see no reason not to kick down the last one standing, but that is a topic for a different day.

Also, now I have given it more thought, I have to apologise to Jacob. He may have been a dreamer but he was absolutely right. You do need a ladder to get  to heaven.
Posted by caribatheist at 7:48 PM