A long way to go to get past the bigotry: 'NO GAYS!' headline in Barbados newspaper highlights disturbing attitude 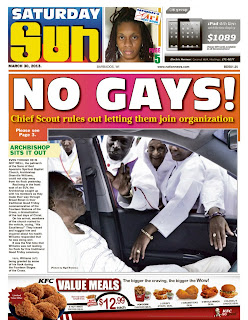 That was the blaring headline of the Nation Publications 'Saturday Sun' of yesterday, March 30th, 2013. I cringed when I saw it. It's a headline that makes all of us that live in, or have roots in Barbados seem backward and bigoted. It is ironic that it came at the end of a week where many in the world made their support for marriage equality known through changing facebook profile pics and making various statements to emphasise that people should not be discriminated against on the basis of sexual orientation. All the while the Supreme Court in the US was hearing oral arguments in the Proposition 8 Case dealing with these same issues.

When I saw the headline, I and most other readers I suspect, had no idea of the context of the statement. No Gays? No Gays in what? Where do we want to bar them from now? Who is making the statement? The sub heading gave a clue by revealing that it was all about the Chief Scout and his organization.
It may seem a bit odd to say, but for me that didn't really matter. The headline was in my view distasteful in the way it lashed out at a minority group. The message to them was ' We don't want you!'

Newspaper headlines are things you glance at quickly. The words hit you out of the corner of your eye when driving as you see the vendor at the side of the road, or catch your attention in the front of a bookstore in an airport terminal as you hustle to catch your next flight. Most people who see the headlines are never going to read the fine print below, but the impact of the words can be devastating.

We can recognise this by inserting another group for 'Gays' in that headline. The one that comes to mind first is 'Blacks.' What would the reaction have been if the front page headline had read 'NO BLACKS!' ? Would Barbadians have accepted that? What if we went to a country in Europe or Africa? How would we react to walking through the airport with our luggage and someone handing us a paper with 'NO BLACKS!" screaming as the headline? To say I would feel uncomfortable would be the understatement of the year. It wouldn't matter the context, it wouldn't matter what the article was saying that I shouldn't be a part of, I know I would feel tempted to just haul my suitcase up and book the next flight out and I am sure they are many that would feel the same way even if they didn't act on impulse.

What about other 'NO!' possibilities?

Today after getting over some of the original disappointment over  yesterday's front page, I sat to read the actual article that had prompted the ' NO GAYS' headline. I purchased and downloaded the entire newspaper to make sure I got the full story. To read the whole thing yourself you'll have to purchase the paper, but there is a summary of the story on their webpage here. After reading the story, I was once again in shock. There was absolutely nothing said by the Scout Leader in the article that could prompt a headline of ' NO GAYS!'

It's not as if he went off on a rant against homosexuals and said never do we want anyone of 'those people' coming near our organization. What I read was nothing like that at all. There was a statement made that the Scouting movement in Barbados maintained its closed door policy against open homosexuals, but that the local organization was monitoring what was happening in the United States as petitions were being made there to change things. The discriminatory policies of the Scout movement are well known and as a member of that organisation all the leader can do is give its position whatever his personal convictions might be. I saw nothing in what I read that could be interpreted as  'Chief Scout rules out letting them join the organization.'

Recognising this inaccuracy just made the whole thing more horrible. I know that my friends in journalism will tell me that you have to editorialize. That's the way you sell newspapers, but this is going too far. The Scout leader was just stating facts, explaining the current Scouts' policy which are set internationally and have a history behind them that promotes prejudice. Thankfully people are now trying to change that. However, the Scout master can only speak to what is currently in place. In fact it sounds to me that given he is 'monitoring' what is going on in the wider world, he would acknowledge that there is a possibility that changes will have to be made in the local movement based on these developments. The Scout Leader went on to recognise that under the current regulations, atheists are also unable to join the Scouts. So indeed the headline could just have easily been 'NO ATHEISTS!'

In a way, I wish they had printed that. That would have been a great can of worms to open up and I would love to get that 'belief' debate out there in the open in Barbados. But I guess at the moment the 'Gays' are more sexy. What is happening here is that the Nation  that Published the ' Saturday Sun' is taking advantage of a prejudice that they know is present, prevalent and widespread in Barbadian and  Caribbean society. They know that many of their readers will have a positive rather than disgusted reaction to a headline like that. Many will be thinking something along the lines of the following.

'Hooray! Thank God we're keeping those gays at bay. It's a relief to know that we are not  following those North Americans who have no benchmark for morality and where absolutely anything goes.'

Just like me, these readers will see the headline without knowing what it is gays are being barred from, but they'll be happy to know that at least someone in the country has enough courage to stand up against this wayward lifestyle.

For many of us in the Caribbean, maintaining the stance against the homosexual position is a matter of national pride. It is as if we expect to be congratulated for choosing to continue to discriminate and be praised for standing in opposition to a progressive social world movement that is seeking to extend basic human rights to a marginalized group. Of course, I criticize the Nation for misrepresenting in the headline and for sensationalising at the expense of demeaning a group in Barbados and the wider world that deserves better. But the fact is that a headline like this would never appear if the national attitude was different. It wouldn't be published if the masses on the whole  decided to stand up and say we won't stand for this kind of discrimination. It wouldn't happen if the Nation thought that they would be backlash and loss of sales for being so insensitive. What is needed is for people to recognise that gay rights are human rights and treat the needs of this group with as much sensitivity as they do any of the other minority groups in Barbados. Alas, this is unlikely to happen, because in our country, the right for a person to be anti-gay appears to outstrip the right of the gay or gay advocate to push for equality.

So, life in Barbados will go on, with the homophobes cheering for a nation sticking to its anti-gay guns and a few dissenters saying that this type of treatment for people with a different sexual orientation shouldn't be. Then we'll all march forward, with the majority thinking that being anti-gay is a reasonable stance that should be respected as part of being patriotic and holding oneself to a higher standard.

Who sets that higher standard? Well, for most in Barbados and the Caribbean, that standard setter is God, the God of the bible. The one whose abominations include shell fish eating, wearing a mixture of clothing textures and trimming beards. It is the belief in that God, cherry picked as his teachings may be, who ultimately keeps a section of society from enjoying basic rights. It's not the first time that our 'Holy Book' of choice has helped us to justify denial of a human right and we can be sure that it will not be the last. If this doesn't tell us that this bronze-age book's expiry date has long past, I don't know what will.

By now, most of you know that it frustrates me no end to see our country continue to look towards Christianity to lift us up, when it so clearly continues to provide the basis for holding social development  back. But sadly we in the Caribbean continue to choose faith, prayer and religious rites over thought, reason and human rights.
Posted by caribatheist at 10:32 PM