Faithland : A fascinating journey in both directions 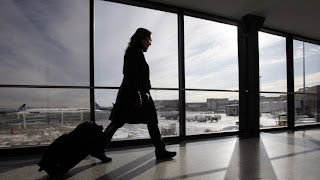 From as long as I can remember I have always loved to travel. There is nothing like boarding a plane and taking a journey into the unknown. The simultaneous anxiety and excitement as you try to imagine what things will await you when you land. Will this place live up to your expectations? Is it all that the brochures make it out to be? Will you be met in the terminal by an eager host or will you be forced to use all your street smarts to somehow make it to your hotel?

I always make it a point when I travel by plane to try to find out something about the person sitting next to me. Over the years I have met people with so many different stories. Excited honeymooning couples just married yesterday, proud mothers feeling the thrill of the opportunity of seeing the first gran and college students enjoying the feeling of liberation of getting that trip away from home for the first time. I have occasionally run into the sullen face of a reflective son or daughter facing the task of burying a parent, or a disappointed professional returning home after a promising job didn't quite work out.

What I often find fascinating in travelling as well, is the difference between the emotions of the traveller beginning the trip and one who is returning home. It was especially clear whenever I was about to land in Barbados. While I usually just gave a cursory glance at my island home through the left window, my neighbours would often be clamouring over me to get as long a look as they could at the paradise they had saved the entire year for. They would tell me that they had their bathing suit at the top of their hand luggage so they could hit the beach even before they were shown their rooms at the hotel. I think that there were as bewildered by my nonchalance as I was by their childlike glee. Now as I live in Western Canada I have come to understand them a bit more. The majestic Rocky Mountains that used to have me staring with jaw dropping awe, have become an everyday background that now generally serve me more as a natural compass to tell me when I am going west. At the same time I regularly long to hear the surf and see the contrasting shades of blue on the water that I used to experience everyday but barely noticed back then. It really is all a matter of perspective.

In living in Canada I have met people from all over the world and of course it has been a great learning experience. I find that perhaps the most interesting people I have met are those from China. I suppose the reason is that, on the surface at least, Barbados and China could not be more different. Whenever I tell a Chinese person that I come from a country of 270 thousand people they stare at me incredulously, assuming that there must be something lost in translation. That number would not even qualify for the designation of small village in their country. An island like Barbados for them is just, like or slogan used to say, completely beyond their imagination.

However, as I have learnt over the last year or so, size and population are only the beginning of our differences. The contrast is just as glaring when it comes to the question of faith. I had a discussion with a colleague from China who asked if I believed in ghosts and /or gods. I answered no on both counts, recognising now the irrationality I had in the past of excepting one group and rejecting the other, but another thing hit me. Unlike other times when I told people I was an atheist there was no startled or excited response. It was just a casual, " I don''t believe in anything like that either."

However, my Chinese friend went on to tell me that she was beginning to have doubts about her non belief. Recently some Christians had come to visit her at home and told her that as someone who didn't believe in God she was missing something very important and worse than that she had no soul. This had her confused; maybe she was not a complete person after all. She remarked that from birth she had been taught , even at school, that there definitely was no God and all religions were just inventions of man. It was nothing that she had ever given much thought to as it just seemed obvious to her. Now that she is in Canada and being exposed to Christianity she was wondering if what she had been taught as a child was really the truth. I was just about to ask her why she would want to change, tell her how fortunate she was to be born in reason and assure her that nobody else had a soul either when I realised something amazing. She and I were going through the same thing , she was on the same faith journey but going in the opposite direction. We were both questioning the ideas that we were born into. She was going to faithland while I was coming from faithland. It was if we were two trains passing in the night. Atheism was her indoctrination, at least that's how she saw it. She, incredible for me to even conceptualise, had never been inside a church in her life. How could she be really sure that it had nothing that could enrich her life?

Once I realised that she was going through the same thing as me, I became more understanding. After all, I think questioning your long held beliefs and opinions is a desirable thing in any context. I encouraged her to explore what for her was something new that seemed exciting. However, I felt I needed to caution her. I told her that I had come from where she is thinking of going to and it's not quite as beautiful as the pamphlets and tv ads make it out to be. It seemed to me that she was thinking of going to faithland as just a 'weekend getaway visit.' Just a stop-over to see what it is like. The problem is that many faithlandians are not satisfied with overnight guests. Once you are in their territory they will lay out everything to entice you to stay longer and if you aren't firm in saying, " no thank you" to certain offers you can easily find yourself holding citizenship there before you know it. So when it comes to faithland it may be easier to just cancel the trip and turn back.

But would that be really be fair ? After all, every journey is a learning experience and as many people have told me even visiting a country with poor living conditions has the advantage of helping you appreciate more what you have at home. So, after some thought I think the best advice for my friend is to go ahead on the journey. See what lies out there. I however suggested that she take the longer route through reason rather than the ' faith express.' I think once you approach through reason you can enjoy faithland for what it is. You can enjoy the stories about mighty kings and beautiful queens, visit buildings as exquisite as any palace you have read about, wear the most radiant costumes, dance and sing along to lovely tunes and lose yourself on an emotional roller coaster in a world of magic and mystery. You can also learn so much in the process about history and traditions and how men and women from the earliest times used all the knowledge they had to make sense of a fascinating yet scary world surrounding them. I think that's worth it if you can get a ticket, just make sure it's 'return.'

Well, for me I have certainly been there, done that and have bought more t-shirts than I care to remember. It's been over a year since I have been to any of faithland's places of interest. Am I tempted to go back and visit? Of course, but for the time being I am enjoying my new home. There are so many fascinating things I am discovering everyday. Like anyone in a new place , I want to explore everything, I just can't get enough. I just want to read all about it, go to all the events, meet the people living in the community and when it comes to the internet I want to see all the sites.

So many people ask me if I think my excitement will last. Shouldn't I wait a bit longer before making the decision to migrate? Don't I miss faithland ? Won't the novelty wear off someday? Yes, I am sure the newness will wear off at some point and just as is the case after every trip I have been on, it will be back to life and back to reality. Well, that's ok with me, because more than anything else, I want to live in reality.
Posted by caribatheist at 5:30 PM