Getting rid of the demons 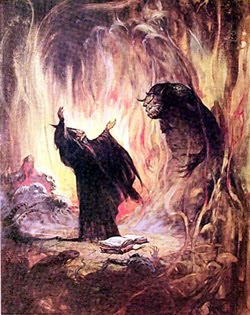 It seems that these days I just don't have to look too far to find things to comment on happening back home in Barbados. Most recently I came across this story about demons in a community. This is a bizarre story even by Caribbean standards. What amused me was that in the story, it says the demon possession started when the lady went on the internet and "saw what she was not supposed to see." I wonder if she stumbled across this website. Could this blog have started it all? Hardly, although I know that what I write here is not what a christian is "supposed to see." I am sure that there are many people in Barbados who would think that God would strike them dead on the spot if they were to so much as to type the word "atheist"in their search engine.

Seeing this article made me reflect on one of the benefits of atheism that too infrequently seems to be brought to the fore. So often christians say that they can't imagine living without God who loves and protects them. However, that belief in God so often carries with it Satan and any number of malevolent spirits that can cause considerable havoc. I know that there are many that find a way to hold on to the Lord while rejecting the devil. I was one of them. I could never understand how a loving God could allow his children to suffer in the torment of hell, no matter how guilty we may have been. But I think I realised even then I wasn't being logically consistent. The fact that I didn't find the idea of a devil appealing in no way meant that he was less likely to be real. I believe deep down there was always at least a slight fear. I used to feel it as a teenager at the times when I had to wait alone in the cathedral cemetary after choir practice, especially if the wind was up and there was a hint of thunder in the distance. Wouldn't say that I was scared but there was a definite discomfort that looking back now I am sure related to the supernatural. Maybe I was wondering if I might see a real duppy.

I have had a few conversations with West Indians during the last year that showed me that fear of ghosts and spirits runs deep in our populations. When I was in Jamaica I was staying at a hotel close to the Great House of Rose Hall where according to legend the White Witch of Jamaica lives. A colleague of mine said that the tours were all during the day, telling me that of course nobody would want to tour the compound if it was not broad daylight. I was just about to ask him why not when my mind jumped back to the cemetary in Barbados. At that moment I realised that as an atheist I had really and truly shed the demons. I could listen to stories about any ghosts or spirits and treat them as the fiction they are, but it is so different for the person of faith. Once you believe in the supernatural you can never totally dismiss as fiction any ghost story. If ghosts exists it stands to reason that the sceptre that is being described is at least a possible manifestation of same. I think that atheists all over the world should look to rent or buy all the "haunted houses" that no one else wants to stay in. I am sure there are some good bargains to be had.

Supernatural belief can affect you in many ways. At my primary school there was a wall we dare not climb if we hit the ball over it playing cricket. Generations of students had sworn that a witch lived in a house there who used to cast spells on children. It didn't matter that no one at the school at the time had ever seen anyone on those premises, natural or supernatural. I can't tell you how many exciting games were ruined and balls forever lost as a result. I heard a story about a fellow in Grenada that no one dared owe money to since he kept a lot of strange looking potions and some exotic animals at his house, this meant he could do very bad things to you if you didn't pay him on time. In Barbados about 10 years ago some fisherman preferred to keep their nets on the shore because of reported sightings of a sea monster.

Perhaps nothing beats the story given by a taxi driver I had in Jamaica. After telling me that Usain Bolt's injuries this year are directly related to persons in the country working voodoo, he told me a story of a lady from St. Maarten. With the most serious demeanour you could imagine he told me how she was afflicted by a disease that made her want to have sex everyday at 6:00 pm. "If she found herself in the kitchen she want to have sex right there, if she was in the supermarket she want to have sex right there, if she was at church she want to have sex right there ! "Apparently she was only "cured" when she went to a "mother" in Jamaica who removed a snake that was in her vagina. "It's true, true!" he assured me, "The lady travelled in my taxi and sat right where you are sitting now!" I smiled and told him gently that I had never observed anything remotely like what he was describing. In my mind there is no doubt that he considered all this to be real.

Ghost accounts can be found all over the Caribbean and are a great part of our folklore. I would hope that we never lose that aspect of our culture. I always loved hearing the stories about the Steel Donkey in Barbados as a child. However , for too many the line between folklore and reality becomes blurred. I think many christians think that as atheists we are being dishonest when we say that we have no fear of the supernatural. They consider it just a bravado statement, believing that in weaker moments we shudder at the prospect of being on the wrong side of these spiritual forces. They don't realise that when we speak of what we would say if we meet a god at the end of our lives that we are talking very, very , very hypothetically.

The fact is that the application of reason is a powerful weapon against the supernatural. Once you recognise that the world is governed by the laws of physics rather than the laws of psychics the fear disappears completely. If supernatural entities are real the entire scientific paradigm is called into question if not rendered invalid; and not even the most raving fundamentalist will argue that there is sufficient grounds to re-examine the total scientific method. When you understand the structure of the atmosphere, troposphere and ionosphere there is no reason to fear that the sky will fall on your head no matter how many chicken lickens there are running around frantically trying to shake you from your complacency. I rigorously applied logic and reason to my belief system and now I can say all my demons have well and truly been exorcised.
Posted by caribatheist at 10:29 PM