When is the right time to criticize? 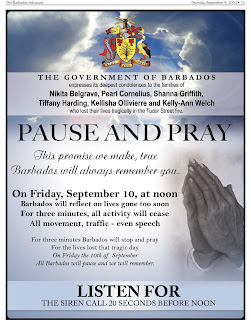 It's been a really tough week for all Barbadians. Last Friday six young women perished in a fire set during a robbery attempt in Tudor Street in the capital city, Bridgetown. Make no mistake, for a country as small as Barbados, the loss of six young lives at one time is a tragedy of massive proportions. Everyone will at least know someone that knew one of the victims. I stand alongside the citizens of my country in condemning this heinous crime and my heart goes out to all the families who have lost loved ones. The outrage has led to people calling for the "gallows to swing" for the two young men that were thought to have been involved. Anger has also led to a 'blame game' that has extended to everybody from fire fighters and police to store owners and architects.

Of course there is one fellow who has as usual escaped blame all together. You guessed it, the one and only almighty God. Curiously, this is even though the words being uttered from so many lips after this tragedy was
"God is in control." Strange thing that, if it was the CEO, the prime minister, the headmaster in control and did nothing while subordinates in their organisations acted improperly , they would have to answer some serious questions.

Well, God's control in this case is just a reminder that he is there for us and will get us through the situation. We must remember him at these times and pray to him to give us comfort. This type of message is not unusual in times of tragedy and I daresay it does often help to soothe the fresh open wounds. I think this way of thinking at these times is also a way to keep faith strong at the time when it is facing its most severe of tests. It is a way of telling society that we are not going to tolerate any non religious views at this time. Effectively, if you can't say something to edify or glorify, ie something proclaiming God, keep your mouth shut. In other words, we don't want to hear from the atheists. Now is not the time for you to be criticizing our beliefs. If you do we will consider you to be unpatriotic, uncaring and selfish.

This is basically what came through to me as I saw the announcement, in the Barbados Advocate newspaper today, shown in the photo, where the government has determined that there will be three minutes of prayer by everybody at noon Friday. Everything will come to a halt, even speech it says and , "Barbados will pause and pray." Doesn't sound like a voluntary thing . So if, like me, you have no God to talk to, you have to find one quick. I hope the flying spaghetti monster is available at short notice.

But seriously, in these situations atheists are forced to shrink away to the back of the room and let the men and women of the cloth have their way with the afflicted. For how could atheists be so insensitive to illustrate at this moment the paradox of an all powerful God who allows such suffering? How could we be so mean to point out the futility of prayer to a God who if he exists can't possibly be unaware of anything that we need? How could we be so daft to choose this moment to explain that "thy will be done " means asking God to do the things that he had always planned to do anyway? No, we are told, now is not the right time for engaging in these esoteric philosophical debates, not when people are suffering. The thing is by silencing us at these times they are defanging us at the moment where we can make the most telling incisions into their belief system. For when all is going well, the idea that God is indifferent to our needs is a very hard sell indeed. Just like the best time to illustrate the weakness in a security system is after a break in, it is when the earthquakes, tsunamis, murders and cancers come that the idea of a God that loves us appears to be blatantly absurd. But those are the times when non belief is strictly off the table.

This of course raises the question as to when therefore is the 'right' time to be critical of religious ideas. The truth is that it really is hard to find the right moment. I know that many have tried to bring in the rational response at the happier times where you can't be accused of kicking someone while they are down. For example, if the six ladies had somehow manged to be saved, God would have been credited with the 'miracle.' Atheists might have pointed to well trained firefighters, additional exists, non flammable building materials, or even just plain good fortune, but they would have been told to keep silent in that scenario too. The response would be, "Why are you trying to take people's thankfulness to God away, devaluing their experience and "bursting their bubble" by explaining things it in such unemotional terms?"

So religion really controls both extremes of the 'emotions market .' It holds sway at all the points where we feel life the most, those moments we will invariably never forget. The highs of the baptisms, marriages, graduations and sporting triumphs and the lows of the job losses, divorces illnesses and funerals. So it seems the only time it's ok to criticize religion is in those neutral moments. Yes, those times when things are not too good and not too bad. The days when essentially nothing is happening. The days that sort of just fade into the background at the end of life. Usually this means a few minutes after a philosophy class at university, when you're just hanging out with nothing much to do. It's no wonder that at the end of the day no one really hears the nonbeliever. On the other hand , when is the right time to criticise atheism? Well pretty much any time, 24 hours a day 365 days a year, it's always open season.

On that subject, it also seems to be always the right time to criticize Islam. However, I must admit that when I think of the horror of those six charred bodies lying in a store after last week's inceneration I cannot get worked up about the story of a man who is threatening to burn a few books on his premises.
Posted by caribatheist at 12:51 AM