The Church of the Metaphorical God 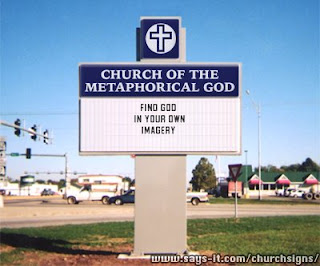 Now isn't this is a church you would love to join? I certainly would. Yes, up to now it is a figment of my imagination but I think that this is a church that could one day save the world. Why? For one thing , I think metaphors are great . So for me, a metaphorical God would be just awesome. Every major religion today knows how powerful figurative language can be. Jesus was a master of the craft, he spoke in parables for God's sake. He never actually told us what the kingdom of heaven was, did he? He didn't give coordinates of the location, he didn't say what material the place was made of , he didn't give the chemical composition of the air. He just used simile and metaphor, "The kingdom of God is like"............ and then he went on to give stories of a lost coin or a prodigal son. What greater evidence do we need to show us that we need to put more effort into getting to know God metaphorically?

Don't for a moment think that metaphors are only for the metaphysical. Many of you may have realised by now that I love to use metaphors in my writing. Sometimes I see them as the frame for the painting, other times as the extra harmony note that adds to the richness of the piece. Where would great works of poetry be without metaphor? How would we hear of love stories and personal triumphs, sporting heroics and natural beauty without the use of the figurative?

Many may not realise, but even in the world of science metaphors persist. Often the concepts in science are so complex that we have to resort to simplified models in order to make sense of what we discover. When we speak of light travelling in waves , it makes it easy for us to understand because we all, at least those of us lucky enough to be born in the Caribbean, have seen waves crashing against the shore. In reality waves that define the travel of light don't move like water waves at all, but still this model is a convenient way to start thinking about it.

In chemistry it's similar. When I was doing my CXCs at 16 I was told that in the atom, electrons orbited a central nucleus much like how planets orbited the sun. I remember drawing all those circles with the electrons represented by 'Xs' along the curve. After mastering and embracing the concept I reached sixth form only to be informed that the model was not " strictly speaking " true. Electrons were in quantised energy levels and occupied orbitals with opposing spins and it was all a matter of wave functions. My eyes glazed over. At first I wondered why we weren't told "the truth" earlier. Couldn't we handle it? Then I accepted that it was probably better to do things that way get a handle on the simple even if not real and then "graduate" to the truth.

So, I have a great respect for metaphor and the benefits it can offer. The universe is a complicated place and it helps to break it down in terms we can understand even if it means we lose a bit of its essence. When we seek to simplify things figuratively we humans inevitably end up using anthropomorphisms; assigning human qualities to inanimate objects. At school I read of angry seas and smiling sunsets. In today's technological age I constantly hear about computers and printers that "play the fool."My friends tell me when they get to work late that their vehicle," she just didn't want to move this morning."

Yet, when it comes to Christians, their relationship with the metaphorical is a bit strange. Many of them readily accept the fact that the bible contains metaphor while at the same time holding on to the notion that every word of the book is literally true. I have heard the apologetic that God does use figurative language in the way that we say " raining cats and dogs." There are others who will admit that there is metaphor in the bible that goes far beyond obvious ones like parables. Many will assert that the entire Genesis story, for example, is allegory. Adam and Eve, Cain and Abel , Noah's flood, Tower of Babel, none of that is literal. Then of course there is another group which take the position that it's all literal until they are cornered in a debate. For them a metaphor is a "get out of jail free" card. "I see that this makes no sense as it is read , so it must be metaphor," is how they reason

The interesting thing is that regardless of how much the believer wants to concede as a metaphor, the one thing that is never considered metaphor is God himself. I don't know why they are so adamant on that point , because that's where they get into problems. He is the all powerful king, the all knowing sage, all loving parent, faithful best friend and even husband and lover. The consequence of all this is that glaring contradictions appear in the resulting deity. Atheists regularly point out that all the omnis just don't fit. An all knowing God could never change his mind or even make a decision and so couldn't be all powerful. The honest believers have to admit that the logic just doesn't add up and this means they have to sacrifice reason for their faith to take root.

Well, it doesn't have to be that way for any believer of any faith, not if they join me in the "Church of the Metaphorical God." In this church, God can have any qualities you wish to give him or her. For here God is purely a model to express something in nature that is too complex to express using its actual characteristics. It is the embodiment of that thing which is intangible.That interaction between the wonder of nature, the synergy between species and the desire of the human spirit. Perhaps this church will be similar to the Unitarian Universalists, but we would go one step further by pushing the congregation to leave God squarely in the realm of the figurative. Any description of God would be welcomed once it was helpful to view it that way in a particular context. Contradictions would not need to be resolved as logic can never penetrate a " faith" based purely on metaphor. My message to the congregation would be to" Find God in your own imagery,"because in my mind any God concept or idea is something that can be cherished and embraced. Indeed, it is only when churches start to talk about a real God that things start to really fall apart.
Posted by caribatheist at 11:12 AM