The Death of the Barbados Prime Minister: A look from the atheist side 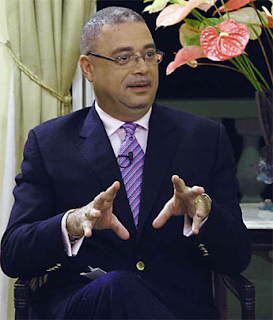 Sadly the fears of the nation have come to pass, the Prime Minister of Barbados , David Thompson is dead. I express my condolences to his family, friends and the entire nation. In spite of the numerous prayers offered and the various worship services as I described in an earlier post, there was to be no miracle. Not even the bold declaration by a pastor who said " we will not let another prime minister die under our watch" made an impact.

Death on its own is hard but its intensity is even greater when it is that of a leader of a nation as small as Barbados. With 270,000 people you can be sure that each person has seen the Prime Minister at some point; maybe out at a political meeting, visiting in his constituency, watching a game of cricket, or attending a calypso tent. This death also feels more tragic because of the youth of our leader at age 48. A leader who had dreamed about being the prime minister from since he was at school, was clearly relishing the job and was committed to leaving his legacy after persevering for many years to get that top spot. So, why would God decide to take him from us now? Well, thankfully I don't have to ponder on such "difficult"questions these days. That's surely an atheistic advantage.
Predictably the tributes have been coming in from all over the globe and many have been very personal and touching. Of course, religious sentiments have been at the forefront. In fact I have yet to read a single one on the main online tribute pages that doesn't allude to something "spiritual." One common sentiment is " Rest in peace and rise in glory." I am still trying to figure out exactly what that means.
The rationalisations for why God decided to take David at this time have been many. "God must have needed an extra angel !" one person claimed. There have also been many prayers of thanks to God for removing Mr. Thompson's pain, as if this is really what they were asking for when they were pleading to the saviour to deliver the PM. One writer was even giving thanks to the Lord for providing men of God at the bedside so that the PM could be ushered into the hereafter. Wait, you need ushers to go into heaven now? Is he going to a wedding? One of those same priests stated how they had released the PM into the arms of God. What would God have done if the men of cloth decided they wanted to hold on to their man? I wonder.
In reading the many accounts of persons who were assured that Mr. Thompson is now in the embracing arms of Jesus, something struck me. Atheists are often criticized by the faithful for being too committed to the physical world, obsessed with naturalism and married unconditionally to the mantra of materialism, trusting only in our five senses. But, what I was reading this morning was Christians clinging desperately to the physical. For their descriptions of heaven speak directly to those same five senses. Heaven is always described as a place, it must therefore be located at some point "X" which we are able to detect somehow. According to many, our senses will be very much alive when that "roll is called up yonder." We will see our long lost relatives, hear the sounds of the blaring trumpets and feel the loving embrace of a creator, we may even smell the roses of a garden or taste milk and honey. I know that many people see heaven as a "spiritual" place but once we are experiencing direct stimulation to our senses, heaven or the spiritual realm must at least be "physical like" in as much as it is analogous to experiences we have here on earth. What is more is that Christians speak of existing in this realm forever, so this "physical like" state they think extends to the infinite. This means that there must be some type of "material" that exists forever. Yet so many theists scoff at the idea of matter always existing.

On the other hand, after hearing the news this morning, I found myself not focusing on things related to the physical realms . I had no thoughts about a body travelling to to take up some cosmic real estate in an alternative world. I accept we have lost the PM in body and that this is not coming back in any form or fashion, I have indeed let go of the physical. Instead I am thinking about his non physical part. The ideas he brought to the table, the love he showed for Barbados and the causes he believed in. In there are things that I can draw from to make a difference in my own life today and well into the future. In so doing, a life can indeed tend to being eternal, as a person can make a difference without existing in the physical. We live in an age where many relationships thrive without any physical interaction. Skype, facebook , instant messaging, are everyday, the material world, in terms of communication at least, is not the ultimate reality.
Yet, on a day like today people spend their time thinking about what lies on the "other side", how our late leader will get a new body and be taken care of until we one day join him. In looking towards hoped for hereafters we forget the messages we are being given through completed life stories in the here and now . We don't toss a book in the garbage just because we have finished reading it, neither should we consider a life "finished" because there are no more chapters to be added.
In the last message the prime minister gave to the nation, he did not appear on screen, due to the severity of his weight loss." I want you to focus on the message rather the medium, " he declared. Mr. Prime Minister, you can be rest assured that is what I will always strive to do.

Posted by caribatheist at 1:08 PM