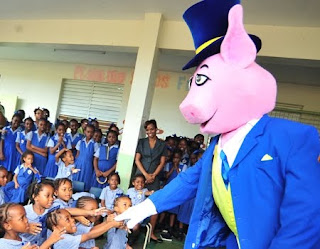 This year there is a character trying to make his way into the hearts of children in Barbados and it's not jolly old St. Nicholas. His name is Percy; Polite Percy. Yes, the government's National Initiative for Service Excellence (NISE) in Barbados has launched this mascot as part of a promotion to encourage the nation to be more mannerly. In short, say "please" and "thank you" and keep the smiles on.

I have to say that I am all in favour of promoting good behaviour. However I had to wonder if emphasis is on the right place when I heard a discussion on television bemoaning that it is a shame that young people are using the texting shortcut" thnx" instead of spelling out the word "thanks" when they communicate. For me, service excellence is not only about saying " good morning, how are you today?" It is about giving the client or customer what they ask for as efficiently as possible. We can all attest to the fact that those automated messages that tell us how important we are, thank us continually for "holding on" and beg us to "please wait a little longer" tend to rub salt in the wound rather than cheer us up. So, hopefully NISE will look at service in a broader sense as time goes on.

Having reflected on Polite Percy as an outsider now living in Canada, it didn't surprise me that Barbadians at home also had some reservations about the program. What opened my eyes a bit though was the reasons I heard for their disapproval. It wasn't that there was too much emphasis on the cosmetic rather than getting to the root of service excellence. It wasn't that in difficult economic times government should put its emphasis on more critical programs. What I have been seeing on facebook comments and local letters to the editor is disgust that NISE chose a pig as a mascot to promote good behaviour. I must admit that this never even crossed my mind when I first heard about Percy. I thought his name was a nice alliteration and children tend to respond to those things. Still, maybe the people protesting had a point. At school if you pushed in front of the line in the canteen you were commonly called a " bore pig" and many of the bad behaved boys coming in class after running around the pasture were accused of " sweating like a pig." It's true, a pig was never something you looked to as a model of behaviour. Eventually NISE responded to the criticisms by saying that the whole point of Percy was to show that even a pig could be reformed to become polite.

I thought long and hard about the objections of the public and about the government's response. The more I reflect the more I feel that there was a great teachable moment lost here. Why do we associate a pig with bad behaviour? Is it something based in fact? They might be out there, but I have not read any comparative animal behaviour studies that suggest that pigs are any worse in their conduct than other animals. I am sure cows, goats, horses, ducks and many other farm animals can be just as feisty, especially when provoked. No, the pig association with bad behaviour is primarily cultural, a stereotype essentially. It would have been great if NISE had instead responded with something like the following:

"We know that traditionally the pig has been associated with bad behaviour in our culture. However, we should all be careful at how we put labels on categories of things, stereotyping is not a good thing. Instead of looking at Percy, let's take a look within ourselves and see whether the negative associations we make in life, often without thinking, are really fair."

I know many will think that this is taking things too far. After all, we are only talking about a pig here. I disagree, it's about mindset and of course we do exactly the same thing when it comes to humans. We have seen this "pig" come in many forms over the years, black people, women, disabled, immigrants from neighbouring countries. Percy is the latest in a long list. What do we do when one of these "pigs" defies our expectations in a positive way? We do just like what NISE did. We take the individual out of the group and say he or she is exceptional. One that has risen above the others in the herd. We exalt the individual but our prejudices regarding the group remain. It goes without saying that as a non believer I am one of those most detested "pigs." "Even an atheist can be a moral person," we have all heard it. Just like the popular " even a caveman could do it." In all these cases you excel inspite of being part of marginalised group "X." Once we keep doing this, prejudices in society in its many forms will always remain.

This week articles like this one and this one in the Barbados Nation have distressingly emphasised this point. Here, the "pig" in the crosshairs is the homosexual. All the clergy in the two articles claim with absolute certainty that homosexuality is a sickness that needs a cure, having nothing to back them up other than " My God-book tells me so."  They go on to pat themselves on the back, proclaiming they are being tolerant for wishing to help homosexuals turn from their "dirty" ways. They no doubt think gays too can become reformed like Percy and one day teach others about good behaviour; of course in this case the sexual kind.

My word to Percy, is to hang in there. I congratulate you for keeping your composure in the face of such unwarranted pig persecution from the public. If I were you I know I would be a pretty peeved Percy. As I said before I can't help you because my species is probably even more despised than yours. However maybe YOU, being a specialist in politeness, can help ME. You see, I just can't seem to find a polite way to tell the people in Barbados that the God whom they love, serve and worship is no more real than you.
Posted by caribatheist at 9:08 PM