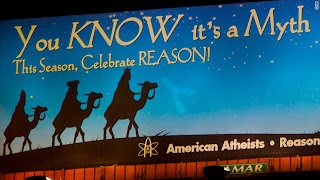 Well, I've just completed my first atheist Christmas . The American Atheists' billboard on the left is absolutely right. I have known it was a myth for many years now, but this year I was truly able to celebrate the season rather than just the son. It has been a time for me of much reflection as I wondered whether I would get the same buzz over the festivities as I did when I was in the church. Would I yearn for the church bells and the merry organ? Would the emotion of the season get to me and would the call to "come let us adore him" be too much to resist? It hit me sometime in early December that I didn't really know how to do Christmas as an atheist.

I am learning everyday as a new member of the "non believers" club, that the rule of thumb is there is no rule of thumb. Some atheists embrace the myth fully and celebrate as strongly as any born again Christian, because it's what they grew up with and love. Others down play the sacred but fully embrace the jingle bells, ho-ho-ho, Santa and gift giving. Then there are the "grinches" who just can't stand to hear even a carol on the radio. There's maybe a silent majority who just shrug their shoulders and live life as usual seeing no reason for a season even if it's to celebrate reason. Then there are some free spirits that have told me there's no need for reason while sharing a beer and that free thinking and free drinking go hand in hand.

So, what did this all mean? It meant I had to make my own holiday, decide what was in and what was out for me . In the end it was a pretty typical Christmas, some getting together with friends, a little gift giving. I didn't do church but I did make a point of listening to some of my favourite carols on Christmas Day and yes I included " Hark the Herald" and " O Come all ye faithful." I wondered how I would feel inside listening to these tunes now. Reflecting on lyrics that I now clearly accept refer to the triumphal arrival of an imaginary saviour. But it didn't matter that morning, I was able to suspend my disbelief for at least a few moments and get a bit of that emotional lift that I have always got from those songs. I did have to recognise the feelings for what they were, which were as another song says" nothing more than feelings." But it was ok, just a break to enjoy something purely coming from inside me. It was not evidence of a supreme being smiling down and warming my soul, it was all chemicals and neurons, but I didn't care. Anyway, I supposed this means I still kept " the baby" in Christmas and didn't throw him out with the bathwater , so to speak. I now feel that celebrating the Christ myth at Christmas is fine.

My view is that many of the religious rituals are ok so long as you recognise what the reality is. I smiled when I heard about the " You know it's a myth" billboard because I knew it would be seen as a great insult by the faithful. But, why should it be? Myths can be very powerful stories that can teach us so much about ourselves. They can inspire, as indeed many great works of fiction do. Myths can give great insight into the culture of a people and what they truly value. A myth surrounding birth is a great metaphor encouraging us to start afresh with renewed vigour in whatever we are doing in our lives. The fact that the festival coincides with the meteorological "new sun birth" of the winter solstice and the new calendar year, doesn't dilute this message it actually reinforces it. So, long live Christmas and all the other end of year festivals! We really can't have too many.

Well, what lies ahead in 2011? I guess it's time for the resolutions. I am happy to say I kept my 2010 one, which was to publicly identify myself as an atheist. Though I am not fully "out" I am well on my way. After all, this time last year nobody on the outside knew. Today I have a number of atheist friends in my local circle and lots more in the online world. I thank all of you who have been part of my journey in 2010. I can only hope that in 2011 we all grow stronger in our lack of faith with every passing day.
Posted by caribatheist at 12:08 PM