Stains that just won't come out 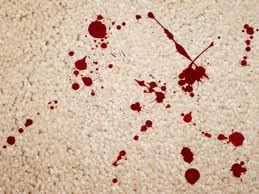 I think it's the dream of many atheists. The use of the tool of logic to chip away at a person's belief so that eventually they abandon faith and lean instead on reason. Often I hear atheists' excitement when they make a religious person start to doubt. They believe that this is the first step to out and out non belief. I am quickly realising that this is usually not the case. I think it's important to keep pushing people into looking at the logic of their beliefs, since many will never do so on their own. I personally find it fun and it can get people to engage in more critical thinking which is important in all aspects of life. Guy P. Harrison in his book, ' 50 Reasons People Give for Believing in a God' does a great job in breaking down the fallacies in theists' reasoning. However, I recognise that people can live with serious doubts for years without ever getting to the point where they accept that belief in a God is unjustified. I myself was a doubting Christian for more than 20 years.

I think the problem is that whereas many atheists see questioning a believer's dogma as leading to the eventual collapse of their wall of faith, religious people tend to view the contradictions, questionable morals and scientific implausibilities pointed out by atheists like stains on a carpet. Stains that must be immediately removed. Doubts are not things to make them think twice about religion, they are nuisances that need to be eliminated so that they can get back to worshipping their God in peace.

Many of us know that getting stains out of a carpet is an onerous task. Blood stains are often the worst, they leave a deep colour and are extremely hard to cover up. Surprisingly, many Christians don't see, until skeptics point them out, that there are blood stains all over the fabric of their faith. Stains seen through things like the order from God to kill the Amalakites, the numerous animals sacrificed whose burnt blood is "pleasing to Yahweh", the negotiated sacrifice of Jephthah's daughter, the plagues of the first borns in the exodus story, the genocide of the global flood and the destruction of Sodom and Gomorrah . All this on just the first half of the carpet!

Beyond these, there are other more subtle but just as persistent stains. There are logical contradictions in the gaps between between the carpet's threads that jump out at you when you look at the fine details. Contradictions that hold that prayers of request from believers have power to influence God but still insist God has a plan set from the beginning of time that cannot be altered by mere humans. When you step back a little further other contradictions enter your field of view, such as the one that holds that God is everywhere and has been with us from the beginning, yet is undetectable to us since he exists entirely outside of space and time. These stains, may not be as horrible as those bloody ones but they are pesky little annoyances nonetheless.

On the surface, believers and non believers admit that regardless of their genesis all these stains are ugly, but Christians are confident they can fight them. They just know that they must be some "solution in a bottle" that can work. So, they hurry off to the " Apologetics Hardware Store" to find the right concoction. There are many brands you can get off-the-shelf sold by popular distributors such as Lee Strobel, Josh McDowell and C. S Lewis. More recently Christians have been opting to order their " Apologetic Solutions" online. Whatever the case, the believers always seem to have faith that pouring these neatly packaged arguments on the stains will make them go away like the magic of Oxyclean. But, just like the late night infomercials the cleaning agents never quite work as advertised.

One of the popular "apologetic solutions" is known as " Might Makes Right." This, the marketers claim can deal with most stains, the idea is that God can do whatever he wants because he is God. If God feels that a people should be wiped out who are we to question? Well, it doesn't take long after application to realise that this one just doesn't penetrate through the stain even though it's a powerful concentrate. Having ultimate power does not make every action you take good. Might does not make right after all. So that's a solution they always have to take back for a refund. Still, the Christians keep trying, but the frustrating thing is that rather than stains coming out, more and more stains appear in the process. If an apologetic solution removes one stain it inevitably creates another one, which we atheists are always right on hand to point out. 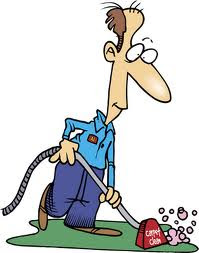 The fact is that the more we show them the stains the harder they work to get them out and this constant cleaning makes them more determined to keep the carpet. This is exactly the opposite response that the we atheist "carpet inspectors" are hoping for. It often takes them a while but eventually the theist will realise what we have been saying all along. "Them stains just ain't coming out." So we say to them, "Now you'll throw it out right?" No! The stains suddenly change their character and become a part of the carpet that the believer admires. They tell us that every stain is a mystery and mysteries are beautiful. It is just amazing that whatever they do to the stains they never disappear. They say that the whole experience reminds them how weak and lacking in understanding they are as humans, but it illustrates how great God is in comparison. For, he could remove all those stains with just a simple wave of his hand and he of course will do just that, when he's ready, in his time. They go on to remind us that indeed Jesus removes stains every Sunday at church. Doesn't the priest say he removes from us every stain of sin? If God can remove sin stains he can also remove trivial stains like logical contradictions. From carpentry to carpetry, Jesus can make any living room perfect.


So, the end result is that their stained carpet will stay. Well, at least most of the time. There are some shrewd entrepreneurs that will watch the failed stain removals and offer the believer a quick remedy. They will sell the disappointed Christian a brand new carpet which they will guarantee is stain resistant. It could be a a Muslim "prayer mat" carpet, a Mormon gold plated carpet or the Adventist "seven day wonder" carpet. At first the believer feels great about having a new product that is stain free. Predictably,the euphoria doesn't last as they soon realise that the new is just like the old. The colours may be different, the texture smoother but the logical contradictions are still there along with the same questionable morals. Still, many will keep changing their carpets all through their lifetime, some even change back and never get satisfaction. Hours cleaning and hiring experts but no results. It's just stain after stain after stain.

So, what can the non believer do about this irrational love of stained carpets? Well, some have tried going the hard way. Recently the American Atheists have tried to pull the carpet straight from under the believers feet with statements like, "You know it's a myth" or " You know they are all scams." These no doubt cause pain when the faithful topple haplessly to the ground. The fall does bring some to face reality, but in other cases it creates animosity to those that induced the fall. So results are likely to be mixed.


Perhaps, the best thing we atheists can do is to invite the faithful to visit our homes and see our carpetless abodes, with a framed message on the wall simply saying " We are good without God." We can let them know that despite what Disney may say, there is nothing magical about a carpet. In our homes, they will see that the floor may be hard and cold but we don't have to worry about stains. We have no cushion under our feet to make us feel protected, nothing we can use to sweep things we don't like under, but we have reason to believe that we are standing on solid ground.
Posted by caribatheist at 8:15 PM