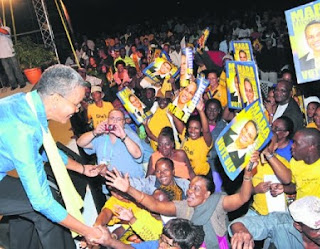 It's a beautiful thing. To see someone who three months ago was devastated by tragedy now basking in triumph is enough to bring a tear to the eye of even the most hard-hearted observer. That was the story in Barbados last week. Mara Thompson, the widow of the late Prime Minister David Thompson, swept to victory in the by-election held in his former constituency. This means she takes over as Member of Parliament for the parish of St.John where her husband was revered for 23 years. It's jubilation not only for Mara but no doubt for many in the rural community that would have been gutted by the sudden loss of their popular leader. This photo from the Nation newspaper captures a bit of the mood.

In the opinions of most Barbadians it would have been a miracle had the result of the election been anything different given the history of voting patterns in this constituency as well as the emotions surrounding the government's choice of candidate. It's interesting though that when the word "miracle" is used in such contexts it is really shorthand for, " It ain't going to happen." Of course when we say it will take a miracle to heal a dying person, the faithful just use that as a cue to ramp up the prayers to make it happen.

According to scripture, earnest prayer from even a few faithful opposition supporters could have caused God to influence the minds of the electorate. God could have made his presence felt in the voting booth and guided constituents to vote according to His will rather than their own. That shouldn't have been hard since there aren't too many atheists in that area, most of the folks there will declare that they pray to God to direct them in all that they do. Of course the results went totally with all the statistical predictions. So, I suppose God doesn't intervene in elections, although Mara was at church two days later presumably to thank God for blessing her with a win. Oh well, I guess it's just more of God's mysterious ways, getting involved and not getting involved at the same time.

Anyway, seeing how things have unfolded since the PM's death, I am sure it won't be long before people point to the illness and death of the former Prime Minister as part of God's plan. It's clear that the opportunity that Mara now has would not have been there if David Thompson was still alive. Regardless of the abilities Mara possesses she would have remained in purely a supporting role to her husband. Suddenly she has the chance to make her own way. Who knows ? She may one day be in the position to become Prime Minister of the nation. However, to suggest that God deliberately made the prime minister his family and country suffer would seem callous in the extreme.

How often is life like this? One person's demise makes the way for another. Many great sportsmen got their first chance to play in a team due to a last minute injury to someone in the starting line up. Falls of gymnasts, hurdlers and ice skaters in Olympic competition have regularly handed gold medals to ecstatic rivals. Understudies in musicals have risen to the occasion due to throat infections of superstars. In all these occasions the beneficiaries have pointed to what they often refer to as "blessings in disguise" and regular credit God with setting up things to be the way that there are. But this way of thinking does open up a troubling "can of worms." If we accept that God made the way for us we must accept that he also deliberately created the obstacles for our competition. It really is a zero sum game. Sporting arenas and election polling stations make this obvious but it happens everywhere in life. Whenever you get that dream job there is someone out there with head in hands cursing under the breath at a missed opportunity. For every couple that get together there are others on the sideline wondering why they didn't manage to make the catch. Indeed, every blessing we have in life is a damning for someone else somewhere even if in most cases we can't see him or her.

People regularly point to the situations where things have worked out in their favour as proof that God is blessing them. However, these stories only serve to underline how inequitable is God's sharing. It's like saying someone is a great government representative because he gave ME a job even as hundreds remain unemployed. If God blessed everyone equally, blessings would effectively become non existent, because there would be nothing one person got that others didn't get. It wouldn't mean that everyone would end up equal but at least we would all start from the same point.

Well, atheists do not have this conundrum. We embrace the simple philosophy that "shit happens." When we take our lemons to make lemonade we don't thank God for denying us oranges. We recognise that from any terrible situation opportunities are inevitably created and it is natural for us to try to make use of the chances that come our way. We do this without the need to feel guilty about having to say thanks to God for slamming the door in another person's face.

So, good luck to you Mara. I can fully understand why you would call your victory in St. John "bitter sweet " but your story may one day become an inspiration. Throughout history there are so many who have used adversity to build something better than what was there before. It is this that keeps me going as an atheist when things are especially tough. There may be no God anymore to get me through but there is enough evidence from history to give me confidence that if I hang on and keep fighting, more often that not things will turn around.
Posted by caribatheist at 12:53 PM